New BOTOX® Pattern – Should You Switch? 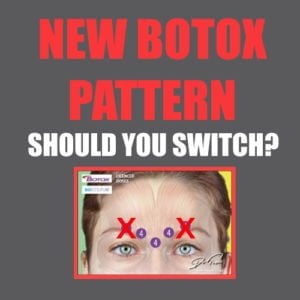 Dr Tim Pearce shares his analysis of a much-talked-about new BOTOX® pattern with an in-depth look at the glabella, toxin anatomy and how to avoid brow ptosis.

The findings had caused concern for a number of clinicians, including some with extensive experience, who were concerned that they’d been ‘doing it wrong’ and need to change their techniques.

“The idea in this paper is that instead of using the more common patterns… a five injection point or a seven injection point in the glabella, which is definitely the norm and it’s fundamentally because that’s what the licensed dose is… that you may be able to get a similar result with fewer side effects using a modified technique.

“And so the modification that’s been made is instead of using five injection points, we’ll use three and try and inject near the origin of the muscle. So, instead of chasing the muscle all the way along its length, we can focus more on just as it’s emerged, at least maybe the bottom third of where it is relative to the origin. And then you may be able to get to the same result with fewer side effects.

“…it’s similar to what you would normally do but there are essentially two injection points taken off the corrugator. The biggest difference is that you’re not injecting the lateral part of the corrugator muscle. There’s also some difference in the angle of injection compared with how I have seen some people inject.

“Altogether it’s about safety. efficacy and efficiency as well. This is certainly something you could consider doing in your practice”

His study covered included 100 clinicians who were trained to use a special technique. The conclusions were that there were no cases of brow ptosis or eyelid ptosis.

Although the results were positive, Tim warns clinicians to remember it was a small study:

“if there was ever a criticism in any aesthetics research, it’s always that the end number is not enough. There’s not enough people in the trial.”

The results were nonetheless better than their stated benchmark, yet again, Tim expresses some caution:

“The incidence they’re looking for in the reference is 3%, chance of an eyelid drop.

“In my clinical experience, I would say it’s not 3%. It would be less than that. But what I don’t do is photograph and measure people in detail after every procedure, so it’s hard to know. But I would say certainly in terms of clinically relevant ptosis, it’s not that high.

“But the thesis is that this might make it safer. And that could certainly be the case. It would be nice if we had 10,000 people in the study. But that’s never going to happen, unfortunately.”

While recognising that fewer injections are generally safer, Tim also suggests that it may lead to poorer aesthetic results. He explains:

“The downside is, in someone who’s got strong muscles, you will still get a lateral pull from the corrugator. In fact, I think you can see that in some of the examples in the paper.

“Now, if your patient wants movement, that can be a good thing. But we all know some patients, they see the outcome as having no movement. And depending on your consultation and what you agree is the actual goal of the treatment, you will have some patients saying, “I can still see my frown,” and they don’t want that. And you may accept that that’s something you need to change in your technique or you might attempt to change the patient’s view of whether movement is a bad thing or not.”

He suggests that injectors try to avoid temptation to stick to a single method but remain open to assessing different and new ways where relevant:

“My message is you need to get the rationale out and understand it in the context of the other procedures that you do. Because if you understand that every good idea has some downside to it and even a bad technique might be useful in some rare circumstance, then you don’t get too attached with one idea and you’re also flexible.

“You start to, instead of looking for the golden tool, as I call it, so the one perfect way of doing it, you actually realise that there are perfect ways for individual people in individual circumstances with all the variables that we have to manage. You start to develop a huge range of tools that you use appropriately rather than just one technique for all people.” 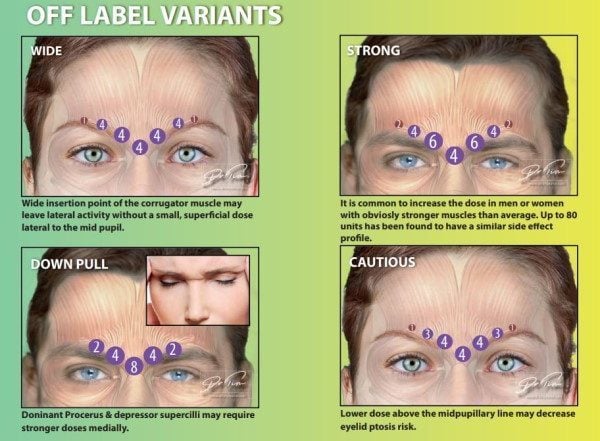 “I think this technique or the paper itself will teach you a lot about how the anatomy relates to your clinical results and how you can use your anatomical model to inject more safely. In everyday practice, I do think there will be a cohort of patients who will want you to treat the lateral corrugator as well. Over time, you can figure out exactly which ones you’re going to treat in different ways. That would be my take home, which is add this as another tool to your toolbox. Don’t disregard everything you’ve learned in the past and just do this, but understand it and use it appropriately. That’s the best way to see all your techniques.”

Watch the full video for more information and discussion on the issue of the new botulinum toxin injection pattern.

You may find the following articles useful:

If you want to learn more about mastering medical aesthetic treatments and complications, or conquering the anxiety of where to place your needle, then register for the next Dr Tim webinar. 8D Lip Design: the sculpting analysis of the lips