What will licensing of cosmetic procedures mean for aesthetic injectors? 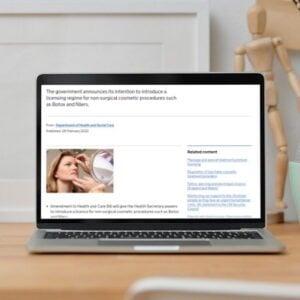 Recently the UK Government announced that it would ‘crack down on unregulated cosmetic procedures’ by introducing a licensing regime for non-surgical treatments including botulinum toxin and dermal fillers. This announcement has caused quite a stir, but what does it mean?

In this blog, Dr Tim Pearce will share his thoughts on what we know about the proposed licensing so far, how he thinks it might be modelled, and how aesthetic practitioners can feed into the process of shaping licensing via a forthcoming public consultation.

Dr Tim will be discussing more medical aesthetic training tips as part of his upcoming webinar series, so if you’re looking to increase your CPD-certified learning and want to learn more skills to make you a better clinician, then step one is to register for the free webinars by Dr Tim. 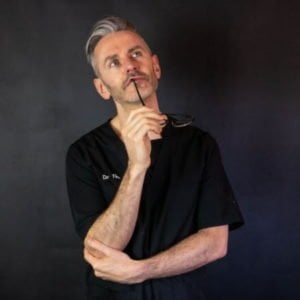 When it comes to the regulation of cosmetic interventions, the UK is somewhat lost, but this is in fact a step in the right direction, because nothing could be worse than the status quo, where there is a complete absence of any real standards at the level of statute. Hopefully, government intervention can only serve to make things better.

Dr Tim likes some of the ascertains made within the limited information published in the press release. For example, it states that the intent of this move is to, “ensure consistent standards and protect individuals from those without licences, including from the potentially harmful physical and mental impacts of poorly performed cosmetic procedures”.

He is relieved to see that it includes the intent to protect the public from the mental harms, as well as the physical. Those of you who follow Dr Tim will know that his perspective on what you do as medical aesthetic clinicians is that fundamentally you are tasked with enhancing the health of your patients through altering their appearance.

As medical professionals, it is not ethical to risk physical harm unless you are enhancing psycho-social health. It is not medically justifiable to simply make people look ‘pretty’. Your duty as clinicians is to base decisions, even aesthetic ones, around health. You can only do this through understanding your patients’ psychology – the situations in which they are hoping to feel and behave differently – and by designing treatment plans that are carefully created to maximise the chances of these changes occurring with minimal medical and psycho-social risks.

He notes than many of his contemporaries do not wholly agree with him on this point and cite that the medical management of complications and how to avoid them are the reasons why only medical professionals should be permitted to carry out such procedures. He believes that the need for health-based decisions is required throughout the patient journey, independently of complications.

Medical complications and side effects are an outcome of any risky action – be that sky diving, getting a tattoo, etc. – and can all result in requiring medical treatment, however, medical professionals are not the gatekeepers to all the risks. Thus, the fundamental argument cannot be based solely on one potential outcome being the requirement of medical attention. He believes that the inherent nature of the cosmetic interventions performed in the aesthetic sector are sufficiently risky to both the physical, psychological, and social health of the public that it requires the medical model of decision making at every stage along the process, and not just at the point of complications.

The medical versus commercial model of decision-making in aesthetics The two models do differ, being commercial does not mean that there is a lack of standards, just standards with different goals. If we take tattoo artists as an example of a similar sector to aesthetics, they will practice their tattoo business in a way that is safe with respect to public health and the spread of blood-borne diseases, even identifying complications related to their craft, such as considering whether to avoid tattooing an individual’s face if it will limit them in social circumstances. However, tattooing a person’s face, despite the psycho-social risk can be considered acceptable, because the commercial model is used to make the decision. If the member of the public is informed and willing to pay for the outcome and be tattooed in a safe environment, then the longer-term health risks are entirely their responsibility and not the provider (tattoo artist). This presents a core difference between medical and commercial models of decision-making.

Coming back to the announcement from the government, Dr Tim therefore wonders if it will be persuaded to enshrine a commercial or medical model of decision-making into its future licensing plans – this is certain to come up during the public consultation stage.

Is appearance a function of your health?

The second element to consider when determining how cosmetic interventions should be regulated is whether appearance is a function of health, or purely superficial.

The World Health Organisation (WHO) defines health as:

“a state of complete physical, mental, and social well-being and not merely the absence of disease or infirmity”

Therefore, does how you look affect your physical, social, and mental well-being sufficiently to be considered a branch of healthcare?

Sadly, Dr Tim believes that many within the government, including those involved in sector-specific select committees will not be inclined to regard it as such, preferring to revert to default thinking that appearance is superficial. The impact of appearance on psycho-social function is largely invisible and not part of how licensing plans will likely be drawn up, despite a growing body of evidence that does connect appearance with psychological health and social function.

The medical model of decision-making commands that every risky intervention we take, we must justify with a logical argument as to why the intervention is likely to improve the health of our patient, and take steps to mitigate risks of medical, physical, and aesthetic complications with the procedure.

What will new licensing for non-surgical cosmetic procedures look like?

In the UK, we have multiple examples of regulations that discriminate by only applying to medical practitioners and not to others offering services within the aesthetic sector. The regulation of cosmetic clinics by Healthcare Improvement Scotland (HIS) only applies to healthcare providers, and in England, the provision of thread lifts requires medical professionals to undertake onerous registration with the Care Quality Commission (CQC) whilst non-medical practitioners can practice this surgical procedure free of any standards.

Therefore, the worst-case scenario with any future licensing of procedures such as Botox and fillers is that it will only apply to medical injectors. Since the information about the amendment to law to allow for licensing comes directly from the Department of Health and Social Care, it does worry Dr Tim that they may only be targeting this at healthcare professionals.

The best possible scenario for patients would be that any licence would demand validation of the ability to practice according to the medical model. Dr Tim appreciates that as a doctor, he is biased to preferring this method of regulation, however, he believes that this would mean that all decisions surrounding the provision of non-surgical cosmetic procedures were grounded in improving a patient’s health, and any licence would require validation of ability to make decisions to mitigate, manage, reduce and/or justify the inherent risk of cosmetic interventions with intended health benefits.

Dr Tim believes that the point of injection is also the point of diagnosis and treatment of complications, thus, the ability to make medical decisions would also be essential. He suggests that any new licensing scheme will lean towards validating technical skills, ensuring safe environments, but leave us with a purely commercial model at its core.

For those of you, like him who believe that an emphasis on the medical model is paramount, he urges you all to participate in the upcoming public consultation on the matter that is expected later in the year.

If you are worried that it will affect your ability to survive in the aesthetic sector, if a purely commercial approach prevails, he reassures you that the medical model is the best way to compete in the sector.

What does the new Cosmetic Licence mean for Injectors?

In his popular Aesthetics Mastery Show on YouTube, Dr Tim shares his thoughts on this change, including how it’s likely to affect your business.

The show has had around 5k views already and over 45 comments, the latest of which say:

“As always, your information was presented powerfully and unbiased, thank you for always being so incredibly effective in delivering such amazing information. Brilliant!” – Dylan Moore

“Thanks Tim concise, well presented and informed as usual. Im all for the best qualified person doing the job and patient safety so no bashing here but when there’s potential clinical complications involving POM, drugs, dosing and so this is firmly in the medical model.” – DA

“Amazing! I felt like I was reading a well written and thorough document! I appreciate this information and the awareness of what’s to come. Thank you Tim!” – Amber Dawn Bontke

Are you still anxious about delivering cosmetic injectables safely?

If you want to learn more about mastering medical aesthetic treatments and complications or conquering the anxiety of where to place your needle, then register for the next Dr Tim webinar. 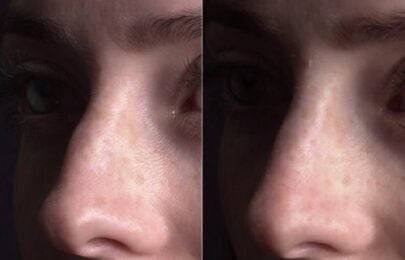 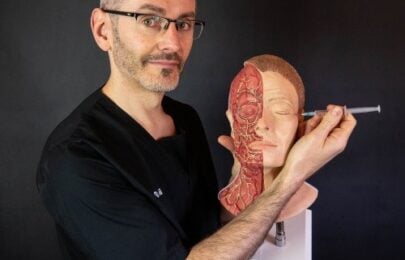 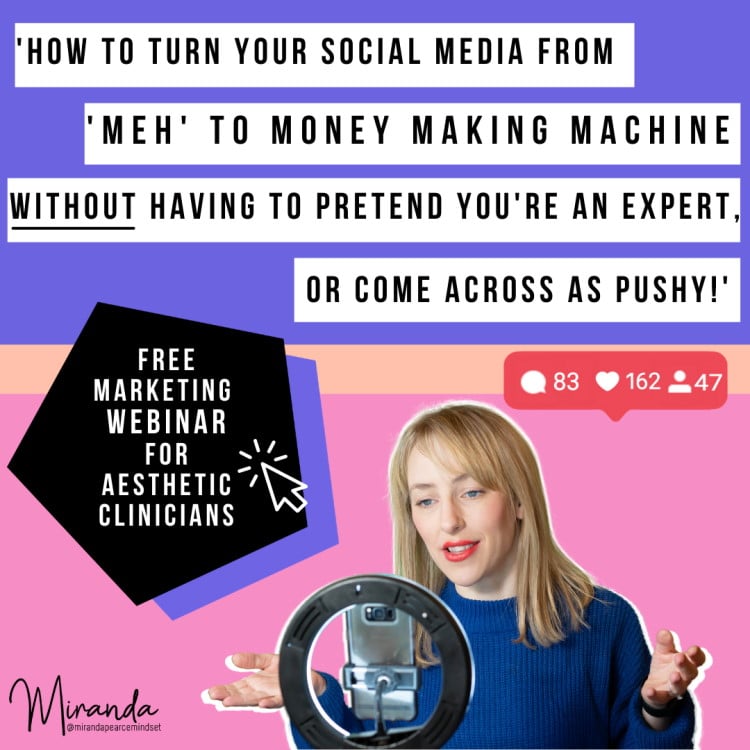